Join us in Montreal

This year's Forum is being held at the The Fairmont Queen Elizabeth in Montreal, Quebec. NAEM has secured deeply discounted room rates at the Fairmont, which is situated in heart of downtown Montreal. NAEM has also secured discounted rooms at a nearby alternate hotel, the Novotel Montreal.

For those coming from the U.S.: To facilitate your entry into Canada, you can download our letter from the Canadian Border Services Agency which recognizes our conference.

For those coming from the U.S.: To facilitate your entry into Canada, you can download our letter from the Canadian Border Services Agency which recognizes our conference.

For temporary visits to Canada for less than 180 days, a visa is not required for U.S. citizens.

If a U.S. citizen traveling to Canada does not have a passport, passport card, or approved alternate document such as a NEXUS card, they must show a government-issued photo ID (e.g. Driver's License) and proof of U.S. citizenship such as a U.S. birth certificate, naturalization certificate, or expired U.S. passport.

Visit the US State Department Website for full details on passport and travel requirements. 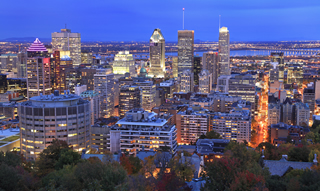 Originally called Ville-Marie, Montreal was named after Mount Royal, the triple-peaked hill located in the heart of the city. Montreal was recently named a UNESCO City of Design and is an important centre of commerce, aerospace, finance, pharmaceuticals, technology, design, culture, tourism, film and world affairs. The official language is French.

Getting to the Hotel

Unless the city is blessed with a rare Indian summer extending beyond September, Montreal is in full fall mode come October. Crisp, cool but fairly comfortable, it's not uncommon to experience a snowfall at this time. But chances are it's a light one where flakes don't stay put on the ground for more than a few minutes or hours, melting away by day's end.

Precipitation: anticipate 6 days of rain in October and 13 days involving light showers. One day of snow flurries a possibility.

Montreal October Weather: What to Wear

For comfort's sake, October in Montreal is all about layers, particularly if out and about from day to night. Indian summer days are a possibility and an afternoon in the sun can be comfortable with only a shirt and blazer or windbreaker but a light jacket with scarf may be necessary when temperatures dip below 10ºC (50ºF), usually by sundown.